Super Earth Full of Water Discovered in Another Solar System

Astronomers have discovered a new Earth-like planet that is larger than our own and may be more than half covered with water, according to a study published Wednesday in the science journal Nature. 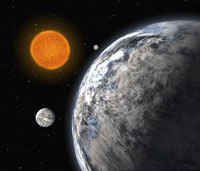 Super Earth Full of Water Discovered in Another Solar System

The so-called "super Earth" is about 42 light years away in another solar system and has a radius nearly 2.7 times larger than that of our planet, according to the study by the Harvard-Smithsonian Centre for Astrophysics.

The discovery of the planet, called GJ 1214b, represents a "major step forward" in the search for worlds similar to the Earth, added the University of California's Geoffrey Marcy in a commentary also in Nature.

The "newfound world" is too hot to sustain life as we know it, said the Harvard-Smithsonian Centre for Astrophysics in a statement.

Its density suggests however it "is composed of about three-fourths water and other ices and one fourth-rock," it said. "There are also tantalising hints that the planet has a gaseous atmosphere."

Its temperature is estimated at between 280 and 120 degrees Celsius (536 and 248 degrees Fahrenheit) with its host star about one-fifth the size of the Sun, according to the scientists, AFP reports.

Planet GJ 1214b is classified as a "super-Earth" because it is between one and 10 times as large as Earth. Scientists have known about the existence of super-Earths for only a couple of years. Most planets discovered by astronomers have been gassy giants that are much more similar to Jupiter than to Earth.

Charbonneau said it's unlikely that any life on the newly discovered planet would be similar to life on Earth, but he didn't discount the idea entirely, CNN reports.

Turning the Hubble Space Telescope towards the planet may allow astronomers to discover its composition.

Dr David Charbonneau, also from the Harvard-Smithsonian Center, who heads the MEarth Project, said: "Since this planet is so close to Earth, Hubble should be able to detect the atmosphere and determine what it's made of.

That will make it the first super-Earth with a confirmed atmosphere - even though that atmosphere probably won't be hospitable to life as we know it," Telegraph.co.uk reports.