Panda Attracts Keen Interests of Scientists Due to its Genome

Genome mapping showing that pandas may prefer a bamboo-based diet because they can't taste meat could unlock secrets to ensuring the survival of the endangered species. 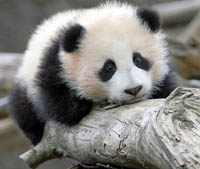 Panda Attracts Keen Interests of Scientists Due to its Genome

The findings published in Nature magazine come from a study led by the Beijing Genomics Institute's branch in Shenzhen in southern China.

The study found that pandas likely roamed the Earth as far back as 3 million years ago, with a genetic makeup that evolves slower than that of humans and other mammals.

Mutations in certain sequences of the giant panda's taste gene, which can affect the ability to experience savory flavors such as meat and other high-protein foods, may have turned them onto a strict bamboo diet, the study said.

Further findings from the panda, named after the Beijing Olympics mascot "Jingjing," suggested the decline in the giant panda population was not caused by inbreeding, because her DNA in various cells differed in many places.

Jingjing's genome map showed that pandas have a similar genetic makeup to dogs and are a subspecies of Ursidae, the bear family, confirming results found in studies from late last year and earlier this year.

Pandas are threatened by loss of habitat, poaching and a low reproduction rate. Females in the wild normally have a cub once every two or three years. The fertility rate of captive giant pandas is even lower.

Only about 1,600 pandas live in the wild, mostly in China's southwestern Sichuan province. An additional 120 panda are in Chinese breeding facilities and zoos, and about 20 live in zoos outside China.