NASA Launches Camera to Get the Foremost Map of Cosmos 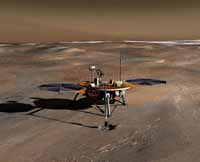 NASA Launches Camera to Get the Foremost Map of Cosmos

A NASA spacecraft blasted into space early Monday on a mission to map the whole sky in search of hidden asteroids, comets and other celestial objects.

The Wide-Field Infrared Survey Explorer, or Wise, lifted off aboard a Delta 2 rocket 6:09 a.m. from Vandenberg Air Force Base on the central California coast.

The spacecraft will spend a month checking out its instruments before scanning the sky for objects that give off infrared light, or heat. Mission managers say the craft will produce the most comprehensive map yet of the cosmos.

Its discoveries should point out interesting targets for current and future spacecraft to study in greater detail.

The $320 million project is managed by NASA's Jet Propulsion Laboratory, according to the Associated Press' report.