Caffeine not only won't sober up a drunk, it may put him in more danger, an American psychologist says in a soon-to-be published study. 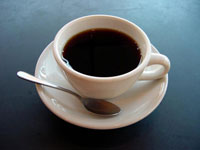 "It's old folklore that coffee can help someone who's had too much to drink," said Dr. Thomas Gould. "It might make you feel more alert and less groggy, but it won't sober you up."

In fact, the uninhibiting effects of alcohol are still there, so the suddenly less tired person might well do something risky, such as drive, under the false impression he's capable, said Gould, a professor of psychology at Temple University in Philadelphia, Toronto Star reports.

In the study, mice given varying doses of alcohol and caffeine had to navigate a maze so as to avoid unpleasant stimuli, such as bright lights and loud noises.

The mice that got only alcohol seemed relaxed, but failed miserably, while those given only caffeine appeared more alert and fared better, although seemed to be uptight.

But mice that consumed both alcohol and caffeine -- up to a human equivalent of eight cups of coffee -- appeared to be relatively alert and relaxed, but were still incompetent at avoiding nasty stimuli, the BBC says.

"The myth about coffee's sobering powers is particularly important to debunk because the co-use of caffeine and alcohol could actually lead to poor decisions with disastrous outcomes," says Thomas Gould, who conducted the research.

He says those who consume both "may feel awake and competent enough to handle potentially harmful situations, such as driving while intoxicated or placing themselves in dangerous social situations," USA Today reports.