Google Reveals its Approach to the Problem of Deforestation 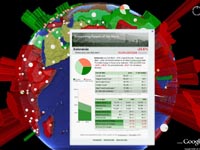 Google Reveals its Approach to the Problem of Deforestation

At the International Climate Change Conference in Copenhagen, search giant Google demonstrated a technology prototype that enables online, global-scale observation and measurement of changes in the earth's forests. The technology will be provided to the world as a not-for-profit service, the company stated.

The prototype is currently available to a small set of partners for testing purposes: Google noted that while it's not yet available to the general public, the company expects to make it more broadly available over the next year.

The technology uses the help of satellite imagery to track deforestation over a period of time and measure the level of loss. While it is possible to view levels of deforestation at different times, Google.org’s engineering managers, Rebecca Moore and Dr. Amy Luers, said there hasn’t been a way to calculate how quickly the world’s forests are disappearing. “With this technology, it's now possible for scientists to analyze raw satellite imagery data and extract meaningful information about the world's forests, such as locations and measurements of deforestation or even regeneration of a forest,” they wrote on the company’s blog.

The United Nations has already proposed a framework known as REDD that would provide financial incentives to rainforest nations to protect their forests; Google argues implementing a global REDD system will require that each nation have the ability to accurately monitor and report the state of their forests over time, in a manner that is independently verifiable. “However, many of these tropical nations of the world lack the technological resources to do this, so we're working with scientists, governments and non-profits to change this,” Moore and Luers wrote.

eWeek has contributed to the report.