South America Could be the Native Land of Dinosaurs

Newly described dinosaur fossils from New Mexico are helping scientists better understand the early development of these ancient creatures. The 6-to-12 foot-long, meat-eating creature, Tawa hallae, is described in Friday's edition of the journal Science. 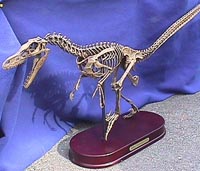 South America Could be the Native Land of Dinosaurs

"Tawa gives us an unprecedented window into early dinosaur evolution, solidifying the relationships of early dinosaurs, revealing how they spread across the globe, and providing new insights into the evolution of their characteristics," Nesbitt said.

While many of the earliest dinosaurs are known from only a few bones, the researchers found bones from five to seven skeletons of T. hallae, Nesbitt said in a briefing.

This dinosaur contains characteristics of several lineages that can help in understanding evolution of the various forms of dinosaurs, the scientists said.

It developed on the supercontinent Pangea, in which creatures could move from region to region before Pangea broke apart into the current continents.

Nesbitt added that the find may reinforce the idea that dinosaurs originated in what is now South America and then moved on to other regions.

T. hallae is an early form of theropod, from which the well known T. Rex later developed, as did modern birds.

Indeed, the new find had some hollow bones, as modern birds do, though it had other more lizardlike than birdlike characteristics, according to Nesbitt.

The new dinosaur is named for Tawa, the Hopi word for the Puebloan sun god, and late amateur paleontologist Ruth Hall, whose collection of fossils helped found the Ruth Hall Museum at Ghost Ranch, where the quarry in which the bones were found is located.