Microsoft and Yahoo Hope for Endorsement from Regulators

Microsoft Corp. may accelerate up to $150 million in reimbursements due Yahoo Inc. if their proposed Internet search partnership is approved by regulators. 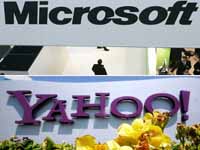 Microsoft and Yahoo Hope for Endorsement from Regulators

The new timetable disclosed Thursday was among the minor changes that Microsoft and Yahoo made to an agreement reached in July.

On July 29, 2009, it was announced with a 10 year deal that Microsoft will have full access to Yahoo search engine to be used in Microsoft future projects for its search engine Bing. Under the deal, Microsoft was not required to pay any cash up front to Yahoo.The companies signed the final contract last week.

Yahoo may now collect the entire $150 million by June 30 next year if it's working with Microsoft by then. The letter of intent had called for Yahoo to receive $50 million installments from Microsoft during the first three years of their 10-year contract.

Yahoo will also get to keep 88 % of the revenue generated from the ads appearing alongside the search results, even though Microsoft will be supplying the technology.

In another amendment to the July agreement, Microsoft gave Yahoo the option to continue showing ads from other parties alongside search results in Hong Kong and Korea. If Yahoo exercises this right, it won't receive the same revenue guarantees from Microsoft as other countries covered in their proposed partnership.

Microsoft and Yahoo together aim to undercut Google Inc.'s dominance in the lucrative Internet search market.

The companies are hoping antitrust regulators will approve their alliance early next year, according to The Associated Press' report.