The iViewer, from British firm Cello, has built-in internet access, and requires a broadband or wifi connection in order to view net channels. 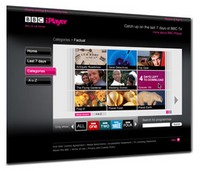 It will be sold exclusively in Marks and Spencer stores until March 1 2010.

It was also reported, several set-top boxes and game consoles have added support for online video services such as Youtube and the BBC's Iplayer, but the Iviewer adds this functionality directly into the TV.

Users can connect the TV to their home network via a supplied Ethernet cable or via a optional WiFi dongle.

More channels will be added in the future, with Cello hoping to bring Sky Player, Channel 4 on Demand and Lovefilm in the near future.

The Iviewer TV features information widgets. Currently there are three widgets providing weather information, which is localised based on your IP address, as well as news and sports from the BBC feed , Inquirer reports .

News agencies also report, shopper got its hands on both models at their launch in Central London, and we were surprised by the quality of the iPlayer video when shown at 32in on the 1,920x1,080 panel. While menus were a little slow to respond, shows played fluidly, and you'd be hard-pushed to tell it wasn't live TV. The chunky interface was also easy to use with the TV's remote from 10 feet away. We were also assured that the hardware was ready for the forthcoming HD version of iPlayer, although the ability to view this content will be dependent on the speed of your broadband connection.

Both models have Freeview tuners, two HDMI and two SCART sockets, component, S-video and composite video inputs, plus two USB ports and a common interface slot. They will be available to buy from mid-December, priced at £399 for the 26in version and £499 for the full HD 32in version. We'll be putting the 32in version through its paces in our HD TV group test next month, and will bring you the review as soon as we can, Expert Reviews reports.