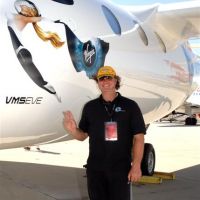 After years of teases, the world's only commercial spacecraft rolled out onto the tarmac at the Mojave Air and Space Port in California. There, California Governor Arnold Schwarzenegger and New Mexico Governor Bill Richardson christened the Virgin Galactic craft with the customary smashing of champagne bottles.

Virgin Galactic chose "Enterprise" for its long tradition in maritime and aviation history, he said.

"It was the name of the first [NASA] space shuttle, and it has dominated science fiction as a kind of watchword for human spaceflight in the future," Whitehorn said. , National Geographic reports.

It was also reported, n a wind-tossed desert night, the dream of space pioneers Richard Branson and Burt Rutan to bring space flight to everyone -- at least everyone who can afford it -- drew closer to reality when the pair unveiled the world's first commercial passenger spacecraft.

To the strings of an ethereal soundtrack, as dreamlike purple lights played across the runway, the VSS Enterprise rolled into view at the Mojave Air and Space Port, about 95 miles north of downtown Los Angeles.

Despite the bracing wind-chill factor, hundreds of people who had flown in from around the world to view the craft burst into cheers and applause.

Tonight, however, it was the tourists who were in the spotlight. Scores of customers who have already paid the full fare showed up to get their first close-up look at the craft they will someday take into space. Texas eye surgeon Carlos Manrique, a paid-up spaceflight customer who shivered along with me as the Enterprise rolled into view tonight, said he could hardly wait for the ride.

"It's not just about this," he said of the glitz that surrounded us. "It's about the adventure," msnbc.com reports.