From charging the Chevrolet Volt's revolutionary power system to washing its exterior, everything about the extended-range electric vehicle is new, but Volt owners must find it familiar and easy to use. 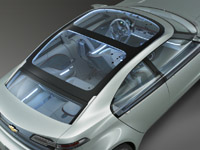 Racing to meet those twin goals on an amazingly tight schedule, the engineering team working on the Volt has 25 to 30 of the vehicles on the road at all times. The deadline is the Volt's on-sale date in about a year.

"There's still a lot to do, and not much time," chief engineer Andy Farah said last week. "It's all part of the natural evolution of any engineering program, but at warp speed."

Every system, every part must be double-checked and idiot-proofed. It's very easy to operate the car.

The rush program to get the Volt on sale in a year has become a 24/7 job for engineers charged with developing the car that's intended to revolutionize the auto industry and reinstate General Motors as a leader in advanced technology.

The Volt has a 40-mile range on battery power and a small engine that serves as a generator of electric power for longer trips.

"I've been bustin' around all morning, and the engine hasn't started yet," Farah said. "The trip computer said I got 260 miles a gallon over the weekend."

Farah recharged the car at home between drives, allowing it to travel nearly entirely on battery power.

The daily test drives have led to a change in how owners will recharge the Volt, and to an eleventh-hour redesign of the door of its charging port after it fell off in carwashes.

The U.S. Environmental Protection Agency is likely to give the Volt a fuel-economy rating of 210 miles per gallon in city driving, GM predicts.

GM built about 80 Volt test cars. Most of those being driven by the engineers were built to test a specific system, so they compared notes.

"You've got the good aerodynamic package," Volt engineering manager Nate Fitzpatrick said to controls manager Chris Kinser, whose Volt had a nearly invisible air dam below its bumper. "That reduces four counts of aerodynamic drag. I'd give my little finger for four counts of drag," he said, waving his hand over the table.

For every question that any new car must address -- How do the brakes feel? Does the navigation system work? And a thousand more -- there's a question that's unique to the Volt.

In order to check whether thecar is charging, the team of engineers has added a light to signify that the car is plugged in and charging, plus a subtle "charging now" beep, and a timer.

"Owners can set the car to charge whenever they like," Farah said. "Just like big commercial customers, they can take advantage of the really low electricity rates in the middle of the night.

"It's like a programmable coffeemaker: You tell it when you want the car to be ready to go, and it'll be charged for you."

The timer can be set for different charging times on weekdays and weekends, or at a unique time each day of the week.

Columbus Dispatch  has contributed to the report.