The Nobel Foundation might have to reduce the money it awards winners of its prestigious prizes due to the effects of the global financial crisis, its director said on Saturday. 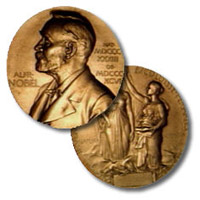 The foundation will give 10 million Swedish crowns ($1.5 million) for each prize this year as it has done for most of the last decade. But the downturn could strain resources for future prizes.

"It might be in the future we would be forced to lower the prize," Michael Sohlman, Executive Director for the Nobel Foundation, told a press briefing. "We have sailed the storm, but have taken on some water."

Sohlman said the value of the foundation's assets had only recovered somewhat in 2009 after it lost nearly one-fifth of its invested capital last year due to the financial crisis.

Prizes for the sciences and for peace were established in the will of 19th century dynamite tycoon Alfred Nobel and have been handed out since 1901.

Nobel stipulated that 31 million crowns ($4.5 million) should be invested in safe securities, the income from which would be distributed annually in the form of prizes. The value of the invested capital at the end of December last year was 2.8 billion crowns ($407.2 million).

The total cost for this year's Nobels -- some 120 million crowns ($17.5 million) -- covers everything from the cash awards to a lavish banquet in Stockholm and a ceremony in Oslo where U.S. President Barack Obama will be awarded the Peace Prize.

The value of the prize has been steady or increased every year since 1950, according to the foundation's website. No prizes were awarded during World War I or World War II.