Green Car Journal named Audi's 2010 A3 TDI the "Green Car of the Year" at the Los Angeles Auto Show on Thursday, marking the second consecutive year a clean-diesel vehicle has won the prize. 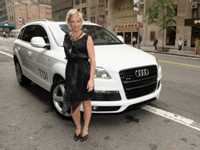 Green Car Journal, a quarterly magazine that covers developments in environmentally friendly cars, said the 5-passenger hatchback stood out among five finalists for the award, which included three hybrids and two clean-diesel vehicles, for its exceptional fuel economy.

The win is "an affirmation that fuel-efficient clean diesel models are becoming a serious competitor in the American market," said Ron Cogan, the magazine's editor and publisher.

The A3 TDI gets 42 miles per gallon on the highway, according to Environmental Protection Agency estimates. Audi said that's a 50 % better fuel efficiency than a gasoline powered A3.

The sporty luxury car, which arrived at U.S. dealerships last month, has a manufacturer's suggested retail price of $29,950. Audi said initial sales have been promising.

"It shows that clean diesel has a place in the market right alongside hybrids," Nysschen said.

The other finalists for the award were the Honda Insight hybrid, the Mercury Milan hybrid, the Toyota Prius hybrid and the Volkswagen Golf TDI clean diesel.