James Cameron was thinking beyond the big screen when he created the alien world of Pandora. The "Titanic" director worked in tandem with video game developer Ubisoft Montreal on the game based on his upcoming sci-fi epic "Avatar." 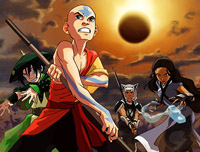 Opening Dec. 18, the film stars Sam Worthington as a paralyzed human soldier who takes on the form of an exotic blue-skinned alien species called Na'vi on their home world Pandora, a remote paradise teaming with freaky flora and fauna.

"James Cameron did something really smart," said Kevin Shortt, story designer of "Avatar: The Game." "When he started preproduction on the movie three-and-a-half years ago, he said, 'I want a game. I know I want a game. I want them working on it right now.' Because, what often happens is they make the movie, and then somebody says, 'Hey, let's tack on a game.'"

Because "Avatar: The Game" is scheduled for release on Dec. 1 — over two weeks before the movie opens — dedicated fans can absorb details about Cameron's otherworldly creation before they see the film. That includes taking a peek at the game's comprehensive database of characters, creatures, vehicles and other minutia that will unravel as players progress.

"It's not just a repeat of the story," said Shortt, who worked also on the "Lost: Via Domus" game. "It's a rich, full experience itself that builds on the world that Cameron already created. We've got our Pandorapedia, which gives all these extra details for fans that they're not going to get anywhere else. This is the first place you're going to get them."