Space shuttle Atlantis and its crew of seven returned Friday from a landmark visit to the International Space Station. 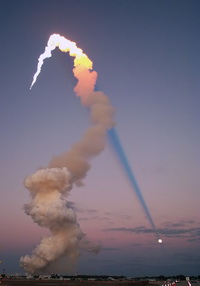 The shuttle touched down asscheduled at 9:44 a.m. EST under cloudless skies. The trip was notable for several reasons.

This was the first shuttle mission dedicated largely to stocking up the station's inventory of spare parts, and the Atlantis was designated to deliver the largest pieces, and the ones with the higher priority. Mission specialists Mike Foreman, Robert Satcher and Randy Bresnik used three spacewalks to install two large platforms to the space station that will serve as the warehouses for the parts, AHN reports.

"Couldn't have picked a clearer day," Hobaugh said as he caught sight of the runway.

"That was a picture perfect end," astronaut Chris Ferguson radioed to the crew from Mission Control in Houston. "Everybody welcome back to Earth," Reuters reports.

NASA's next shuttle flight is in February. Endeavour will deliver a full-fledged module to the space station, complete with a cupola for prime Earth gazing with a domed chamber that has seven windows.

The five remaining space station residents, meanwhile, may have to dodge a piece of space junk this weekend.

NASA said Friday that flight controllers were monitoring a large piece of an old Delta rocket that could pass within an uncomfortably close six miles of the outpost Saturday afternoon. The rocket was used to launch NASA's Stardust spacecraft in 1999 to gather comet dust samples.

A decision on whether to move the space station to avoid a possible hit was expected later Friday, FOXNews reports.