China's Plans for Lunar Exploration are Quite Distinct

China plans to launch its second lunar probe next October in preparation for an unmanned moon landing by the end of 2012, space program officials were quoted Friday as saying. 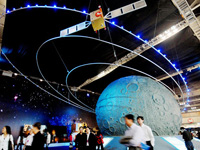 China's Plans for Lunar Exploration are Quite Distinct

The Chang'e 2 probe is an advanced version of the Chang'e 1 that crashed into the moon in a controlled collision at the end of a 16-month mission in March.Chang'e 2 will orbit 60 miles (100 kilometers) closer to the moon and carry a higher resolution camera.

The planned launch highlights China's growing space ambitions, six years after joining Russia and the United States as the only countries to launch men into orbit. China has launched two more manned missions since then, including one last year featuring the country's first space walk.

The lunar exploration program also calls for a mission to return samples of the moon's surface in 2015. Engineers are working on prototypes of the moon lander and rover, christened Chang'e 3, with a landing site chosen on a chunk of lunar real estate known as the Sinus Iridium.

A manned lunar mission is also regarded possible by 2017 — three years ahead of NASA's initial target date for returning to the moon.

China's space ambitions include building an orbiting station and sending a mission to Mars, putting the nation in the forefront of a tightening Asian space race involving India, Japan and South Korea.

Although initially aided by Russia, China's program has largely advanced on its own, underwritten by the booming economy and fervent government support for scientific research and development.

While China says the program is purely for peaceful ends, its strong connection to the armed forces and Beijing's development of anti-satellite weapons have prompted some to question that claim. The military connection and the secretive, authoritarian nature of China's communist one-party state have also inhibited cooperation in space with the U.S. and other nations.

The program enjoys strong support among the Chinese public, however, shielding it from the sort of criticism and budgetary pressures that constrain such programs elsewhere, according to the Associated Press' report.