About 18,000 species found to live without sunlight at all

The creatures living in the depths of the ocean are as weird and outlandish as the creations in a Dr. Seuss book: tentacled transparent sea cucumbers, primitive "dumbos" that flap ear-like fins, and tubeworms that feed on oil deposits. 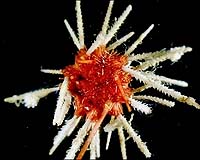 About 18,000 species found to live without sunlight at all

A report released Sunday recorded 17,650 species living below 656 feet, the point where sunlight ceases. The findings were the latest update on a 10-year census of marine life.

"Parts of the deep sea that we assumed were homogenous are actually quite complex," said Robert S. Carney, an oceanographer at Louisiana State University and a lead researcher on the deep seas.

Thousands of marine species eke out an existence in the ocean's pitch-black depths by feeding on the snowlike decaying matter that cascades down — even sunken whale bones. Oil and methane also are an energy source for the bottom-dwellers, the report said.

The researchers have found about 5,600 new species on top of the 230,000 known. They hope to add several thousand more by October 2010, when the census will be done, The Associated Press reports.

"The diversity of life in the deep sea is much, much greater than we've believed," said Robert Carney of Louisiana State University, who co-leads a study of the ocean depths as part of a wider international Census of Marine Life (COML).

"The abyss is not the dark hole any more," he told Reuters of surveys with deep-towed cameras, sonar's and other technology.

Light typically penetrates about 200 meters into the seas -- comparable to the height of the 169-meter Washington Monument obelisk -- and the zone beyond has long been viewed as a desert with crushing pressures.

Beyond the sunlit area where plants can grow, creatures have to exploit bacteria, for instance that break down methane or oil, or food falling from the surface such as whale carcasses.

Among creatures were luminous jellyfish and gelatinous creatures known as finned octopods, or "Dumbos" because they flap ear-like fins and look like the cartoon flying elephant.

Dumbos, about two meters long, are among the big creatures of the abyss, also including some sharks or siphonophore jellyfish, Mike Vecchione, of the Smithsonian Institution, said.

"Siphonophores have been reported to be longer than a blue whale," he told Reuters. The Census of Marine Life is a 10-year project due for completion in October 2010.