Scientists Found Water on the Moon

Spacecraft that crashed into the moon last month kicked up a relatively small plume. But scientists have confirmed the debris contained water — 25 gallons of it — making lunar exploration exciting again. 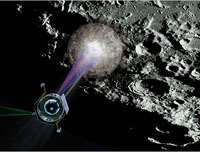 Scientists Found Water on the Moon

Experts have long suspected there was water on the moon. So the thrilling discovery announced Friday sent a ripple of hope for a future astronaut outpost in a place that has always seemed barren and inhospitable.

"We found water. And we didn't find just a little bit. We found a significant amount," Anthony Colaprete, lead scientist for the mission, told reporters as he held up a white water bucket for emphasis.

He said the 25 gallons of water the lunar crash kicked up was only what scientists could see from the plumes of the impact.

Some space policy experts say that makes the moon attractive for exploration again. Having an abundance of water would make it easier to set up a base camp for astronauts, supplying drinking water and a key ingredient for rocket fuel.

The October mission involved two strikes into a permanently shadowed crater near the south pole. First, an empty rocket hull slammed into the Cabeus crater. Then, a trailing spacecraft recorded the drama live before it also crashed into the same spot four minutes later.

Though scientists were overjoyed with the plethora of data beamed back to Earth, the mission was a public relations dud. Space enthusiasts who stayed up all night to watch the spectacle did not see the promised giant plume of debris.

Members of the blue-ribbon panel reviewing NASA's future plans said the discovery doesn't change their conclusion that the program needs more money to get beyond near-Earth orbit. The panel wants NASA to look at other potential destinations like asteroids and Mars.

President George W. Bush had proposed a more than $100 billion plan to return astronauts to the moon, then go on to Mars; a test flight of an early version of a new rocket was a success last month. President Barack Obama appointed the special panel to look at the entire moon exploration program. The decision is now up to the White House, and NASA's lunar plans are somewhat on hold until then.

As for unmanned exploration, previous missions had detected the presence of hydrogen in lunar craters near the moon's poles, possible evidence of ice. In September, scientists reported finding tiny amounts of water in the lunar soil all over the moon's surface.

Scientists spent a month analyzing data from the spacecraft's spectrometers, instruments that can detect strong signals of water molecules in the plume.

Mission scientists said it would take more time to tease out what else was kicked up in the moon dust.