During the 2009 Leonid meteor shower, you may see anywhere from 30 to 300 shooting stars an hour, depending on whether you're in the right place to see the showy peak on November 17, experts predict. 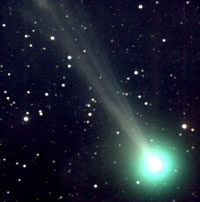 With the highest number of meteors streaking across the skies around 4:45 p.m. ET, the Leonids peak will be effectively invisible for viewers in North America and Europe.

In those regions, sky-watchers are advised to venture out away from bright city lights between 2 a.m. and 4 a.m. on the 17th, when they should see 30 to 50 meteors an hour.

But in Asia, the peak happens during predawn hours, so observers there will have a front row seat for this year's showy display, National Geographic News reports.

The Leonids are expected to streak across the sky every few minutes as the Earth passes through dust remnants left over by the comet Tempel-Tuttle in 1466.

Forecasters define a meteor storm as 1,000 or more meteors per hour, which makes the 500 meteors per hour prediction for Nov. 17-18 a "half storm," said Jeremie Vaubaillon of Caltech, who successfully predicted a related outburst of meteors a few weeks ago, according to NASA’s Web site.

The 8 meteors-per-minute prediction is based on last year’s abnormally abundant Leonid display that broke what scientists from Caltech and NASA described as "many years of Leonid quiet," NewsTribune reports.

The Leonid meteor shower gets its name because when viewed, the shooting stars in this shower appear to come from the constellation Leo. The dusty particles hitting the earth’s atmosphere are actually leftover debris from the comet Tempel-Tuttle.

The Tempel-Tuttle comet is on a large orbital path and enters the inner solar system once every 33 years. There are only a few instances in history of the comet even being observed from earth.

According to NASA, although Tempel-Tuttle doesn’t actually cross earth’s orbital path, each time it enters the inner solar system it leaves behind a path of dust that can eventually drift into earth’s path and later hits earth’s atmosphere, creating a meteor shower.

The intensity of the Leonids depends on which dusty path earth encounters, and how close to the center of all of that debris the earth gets. In 1999 and 2001 the earth came across the dusty comet path from it’s solar system visit in the year 1333. Some records counted as many as 3000 meteors per hour at peak times in those years, Dulcinea Media reports.