Life On Other Planets May Raise Theological Dilemmas

Over the past five days scientists and astronomers held a meeting to discuss and share opinions on an ever interesting question: Is there life on other planets? 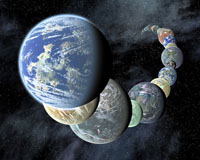 Life On Other Planets May Raise Theological Dilemmas

The Vatican has asked that age-old question during a "study week" on astrobiology gathering leading scientists from around the world.

"The questions of life's origins and of whether life exists elsewhere in the universe are very suitable and deserve serious consideration," said the chief papal astronomer, Father Jose Gabriel Funes.  Although the questions "offer many philosophical and theological implications," the gathering of about 30 leading astronomers, geologists, biologists, physicists and other scientists "focused on the scientific perspective," Funes added.

The event hosted by the Pontifical Academy of Sciences was held to mark the International Year of Astronomy.

Chris Impey of the University of Arizona said that it was appropriate that a meeting on that frontier topic was hosted by the Pontifical Academy of Sciences. "The motivations and methodologies might differ, but both science and religion posit life as a special outcome of a vast and mostly inhospitable universe."

Technological breakthroughs have led to the discovery of more than 400 planets beyond the solar system, he noted.

His colleague Athena Coustenis of the Paris-Meudon Observatory, thinks that if life exists "we will find it soon," and most likely within our solar system. In astrobiology, "we realise every day that reality goes beyond fiction," she said.

The participants hoped to publish their conclusions in a book, Funes said.

The possibility raises a difficult theological question concerning redemption from the original sin, which by Christian tradition occurred in the Garden of Eden when Adam and Eve ate the forbidden fruit of a particular tree.  Funes supposes that: "If other intelligent beings exist, it's not certain that they need redemption."