Google Dashboard: What Will Google Do with Information?

This week one of Google's products stood out amongst standard company's releases. It wasn't a Gmail Labs experiment or a new parameter for search. It was a fairly unassuming new product called Dashboard, which aggregates users' personal information from more than 20 Google services into a single, password-protected page. 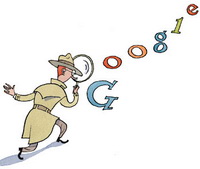 Google Dashboard: What Will Google Do with Information?

Google unveiled the new service with a blog post titled, "Transparency, choice, and control – now complete with a Dashboard." The choice and control parts of the equation are pretty clear – users can update their account information directly from the new Dashboard, which is far handier than being forced to visit each page individually.

However, the fact that Google opted to lead its Dashboard blog post with the word "transparency" speaks to a fundamental concern about the company's current position in the world. While the advent of Dashboard can be seen as a response to past criticism and an attempt to avoid future accusations, the availability of information like our Web history does have the effect of bringing to light even more questions — such as what exactly does Google plan to do with our information? It's a reminder that, as we hand more and more of our own personal information over to a company like Google, we need to keep asking questions, PC Magazine reports.

It was also reported, Dashboard includes everything from the number of conversations in your Gmail inbox to how many people are following you on Google Reader to the most recent task you completed with Google Tasks. Icons indicate if you've made a piece of information (such as your age) public; links let you go to the originating services and manage settings relating to them. It puts scads of information about you in one place, which is why you need to enter a password to get to it -- even if you're already logged in, PC World reports.

News agencies also report, Google puts a "people" icon next to account information that's available to anyone Googling -- err, searching the Net. That's useful info. But if you want to make that stuff private -- or just find out if it's even possible to make it private -- you have to go deep into the settings of each Google app. If you don't already know where to go to change this setting, you may not get there.

A public calendar can reveal scads of sensitive info -- like the names, phone numbers, and e-mail addresses of people you're meeting with, or when you'll be out of town for an extended period. It's one-stop shopping for identity thieves and/or your local cat burglar.

Similarly, for people who were appalled to discover just how deeply Google was embedded in their lives -- quite a few of them, judging from the blog chatter -- there's no easy way to simply unsubscribe from these services, InfoWorld reports.