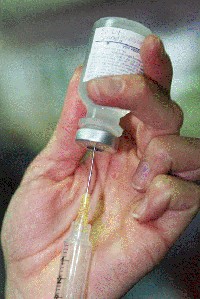 Production delays have resulted in far fewer doses of the vaccine than federal officials had hoped for by this time. The first estimates called for 40 million doses by the end of October and 190 million doses by year's end.

The officials said that every day more vaccine is becoming available, and they hope to see an end to the shortage over the next several weeks , U.S. News & World Report reports .

It was also reported, first came the jibes about the U.S. government rushing out an untested swine flu vaccine. Now, critics say it is not fast enough.

"The premise that 'you can't win' is part of the equation," said Dr. D.A. Henderson, who advised the administration of former president George W. Bush on pandemic preparedness.

It is a lesson playing out in real time by U.S. government health officials as the H1N1 pandemic turns from a scientific and logistical battle to a political one.

Plans have been in the works for handling a flu pandemic since 2003, when H5N1 avian influenza re-emerged in Asia. Health officials held roundtables and ran tabletop exercises, with journalists, bloggers and activists , Reuters reports.

Meanwhile, many U.S. states and cities say they have received about one-tenth as much vaccine as they originally had expected by this time. Frieden said the delays may discourage people who are lining up for vaccine.

"It is likely also as we produce more vaccine and as both people are given the opportunity to get vaccinated, and as disease maybe wanes in the future, we will have significant amounts of vaccine that can't be used," Frieden said.

"One of the messages for states, localities and health providers is not to reserve vaccine that they have available, to give it out as soon as it comes in, because more is on the way," ABC News reports.