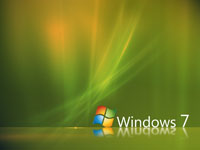 The world's largest software company, which powers more than 90 % of personal computers, has received good reviews for the new operating system.

"It's the first really significant release of Windows in a decade," said analyst Brendan Barnicle of Pacific Crest Securities. "Given the missteps around Vista, people really questioned Microsoft's relevancy in the technology space. So this is a critical first step for Microsoft regaining that credibility."

The new system -- which is faster, less cluttered and has new touch-screen features -- comes almost three years after the launch of Vista, whose complexity frustrated many home users and turned off business customers.

Microsoft is charging $199.99 for the Home Premium version of Windows 7, or $119.99 for users seeking to upgrade from older versions of the operating system -- well below comparable prices for Vista.

For the first time, shoppers will be able to buy PCs loaded with the software direct from a branded Microsoft store, with the first of a planned chain set to open on Thursday in Scottsdale, Arizona.

The U.S. holiday season will soon reveal whether consumer PC sales get a kick from Windows 7, but success with corporations -- the key to Microsoft's financial power -- won't be clear until next year, analysts say.