Researchers re-scrutinize  the fossil discovery, known as Ida, announced last May with its own book and TV documentary. 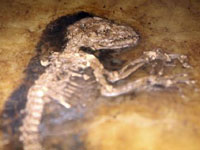 A publicity blitz called it "the link" that would reveal the earliest evolutionary roots of monkeys, apes and humans. Experts protested that Ida wasn't even a close relative. And now a new analysis supports their reaction.

Scientists say  Ida is as far removed from the monkey-ape-human ancestry as a primate could be. Researchers compared 360 specific anatomical features of 117 living and extinct primate species to draw up a family tree.

Ida is a skeleton of a 47 million-year-old cat-sized creature found in Germany. It starred in a book, "The Link: Uncovering Our Earliest Ancestor."

Ida represents a previously unknown primate species called Darwinius. The scientists who formally announced the finding said they weren't claiming Darwinius was a direct ancestor of monkeys, apes and humans. But they did argue that it belongs in the same major evolutionary grouping, and that it showed what an actual ancestor of that era might have looked like.

The new analysis says Darwinius does not belong in the same primate category as monkeys, apes and humans. Instead, the analysis concluded, it falls into the other major grouping, which includes lemurs.

"This is a rigorous analysis based on many features," said Eric Sargis, an anthropology professor at Yale. He said he'd found the argument of the Darwinius researchers unconvincing, so the new result came as no surprise.

In fact, it confirms what most scientists think, said David Begun, a paleoanthropologist at the University of Toronto.

Jorn Hurum of the Natural History Museum in Oslo, Norway, an author of the Ida paper, said he welcomed the new analysis.