Vaccination in Poor Counrties Worries WHO

Health officials  analyse world's vaccination measures. There is much left to be done. 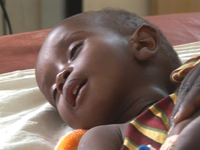 Vaccination in Poor Counrties Worries WHO

A report by the World Health Organization, UNICEF and World Bank said life-saving vaccines, common in wealthy countries, do not reach an estimated millions of children who are most at risk -- mostly in Africa and Asia.

The authors of the report are calling on donor nations to address a funding gap that leaves millions of children still at risk, particularly in the poorest nations and communities, where preventable diseases take their deadliest toll.

At least an additional $1 billion per year would be needed to ensure that new and existing vaccines will be delivered to all children in the 72 poorest countries, the study authors said.

Manufacturers in developing countries are now meeting 86 % of the global demand for traditional vaccines, such as measles, whooping cough, tetanus and diphtheria, the report said.
The United Press International has contributed to the report.