Better Samples of AIDS Vaccine to Be Released in Near Future

The results of  an experimental AIDS vaccine test in Thailand proved a bit discouraging. And Still researchers believe the fresh data can help to improve the vaccine. 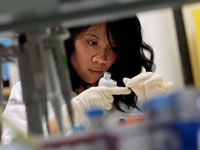 Better Samples of AIDS Vaccine to Be Released in Near Future

The results also hint that the vaccine may work better in the general population than in those at higher risk of infection, such as gay men and intravenous drug users. It was the first time an AIDS vaccine was tested mostly in heterosexuals at average risk, and doctors have long known that how a person is exposed to HIV affects the odds of becoming infected.

The U.S. Army has long had a partnership with Thailand and its Royal Army to test vaccines and medicines to protect troops and the general population. Soaring rates of HIV infection a decade ago led the Thai government to make vaccine research a high priority. Some previous experimental AIDS vaccines have been tested in Thailand as well.