Windows 7 to Be Launched on Thursday

New Microsoft's Windows 7 operating system will formally be launch on Thursday. Previously the company recruited the likes of the Rolling Stones, Jerry Seinfeld, and other cultural icons to help pitch its software, Microsoft is keeping things low key for Windows 7's debut. 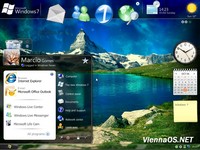 Windows 7 to Be Launched on Thursday

CEO Steve Ballmer and other executives are expected to attend launch-related events throughout the week in New York City and other locations, while users have been encouraged to hold their own Windows 7 launch parties with like-minded tech enthusiasts.

The company has also teamed up with animator Seth MacFarlane to produce a half-hour Family Guy episode featuring Windows 7.

For the most part, however, Microsoft is keeping Windows 7 hoopla to a minimum—and with good reason. The company expended considerable resources to create buzz and consumer awareness around its previous OS, Windows Vista, only to watch the product get pilloried by reviewers and users after its introduction in early 2007, InformationWeek reports.

It was also reported, analyst Gartner said more than 15 million PCs with Windows 7 installed would be shipped globally in the last three months of the year and it would overtake Windows Vista as the main operating system in 2012.

The firm said consumers and small businesses would be the fastest adopters of Windows 7.

After a downturn in PC sales, Harvey Norman is expecting a large sales boost from Windows 7.

Chairman Mr Harvey said the retailer's PC sales had dropped by about 10 per cent in recent months, as consumers delayed off purchases until Windows 7 was released.

"Our computer sales hardware sales have dropped quite a lot over the past couple of months," Mr Harvey said. "All the rest of our business is strong. That's the weakest part of our business, The Australian reports.

In the meantime, Windows 7 performance is better than Windows XP SP3 and Vista SP2, but only if you run 64-bit Windows 7. One potential gotcha: Much of the performance gains are reliant on having up-to-date 64-bit hardware drivers and components. That may mean buying new hardware, as older hardware may not have the necessary components and updated drivers.

It's only $10 a seat, and well worth it. MDOP contains important components, such as Microsoft's Diagnostics and Recovery Toolset (DaRT), which helps users and support personnel deal with catastrophic machine failures. There's also Advanced Group Policy Management, which allows for active and "pushed" policies to users and groups. This feature can prevent damage from zero-day failures and fine-tunes policies for system admins. And there's Asset Inventory Service, which tallies software inventories for both compliance and provisioning purposes. Other MDOP components address application and desktop virtualization.

If you're considering upgrading from XP to Win 7 on the same machine, Microsoft doesn't directly support this, and recommends that a fresh installation be made on new hardware. Any attempt to upgrade will move the directory structure known as Documents and Settings into the new, Unix-like 'user' directory structure, and registry settings for Win 7 will break many applications, Computerworld reports.