News via Mobile Phones Proves as easy as via TV

The Advanced Television Systems Committee (ATSC), which oversees TV standards for the U.S., has approved a standard for mobile digital broadcasts.

News via Mobile Phones Proves as easy as via TV

The ATSC Mobile DTV Standard will allow local TV stations to broadcast to mobile devices on the frequencies they already have. Consumers may be able to pick up the broadcasts on laptops, handheld TVs and in-vehicle entertainment systems as well as mobile phones. 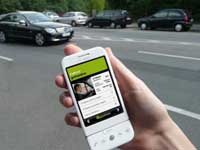 News via Mobile Phones Proves as easy as via TV
Mobile TV has been more successful in some other countries, such as Japan and South Korea, than in the U.S. Handset makers Samsung Electronics and LG Electronics were promoting two different specifications to the ATSC until last May, when they joined forces on a unified proposal.

Consumers can already watch TV broadcasts on some Verizon Wireless and AT&T handsets, via the FLO TV network backed by Qualcomm. However, the FLO service is paid and is focused on national rather than local offerings, according to PC News' report.