Global Handwashing Day is a campaign to motivate and mobilize millions around the world to wash their hands with soap. The campaign is dedicated to raising awareness of handwashing with soap as a key approach to disease prevention. 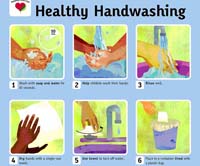 Global Handwashing Day is being celebrated today in 70 countries around the world, with ritual hand-washing clinics, children singing about the disease-preventing benefits of hand-washing and a heartwarming study to explore what messages work best in promoting the use of soap in hand-washing.

Researchers from the London School of Hygiene and Tropical Medicine spent several months leading up to last year's Global Handwashing Day peering through a camera's lens at men and women using a service station's restroom at a major crossroads in Britain. Their challenge: to gauge not only how many people actually use soap when they wash their hands, but also what messages -- flashed onto LED screens at the entrance to the toilets -- will most effectively induce people to use soap when they wash their hands?

They have gleaned these truths about men, women and hand-washing.

Fewer than a third of men (32%) used soap when they washed their hands -- and those were the ones that actually washed their hands. And they responded best to hand-washing-reminder messages that invoked disgust, such as "Wash it off now or eat it off later."

Fully twice as many women (64%) used soap. And women seemed especially receptive to messages that were "reminders" of good-hygiene measures they were presumed to know already.

The most effective message in inducing people to use soap in washing their hands was, "Is the person next to you washing with soap?" The authors of the study, published in the American Journal of Public Health, suggest that this message appeals to a viewer's sense of shame: If the person next to me is paying attention, I'd better not get caught dirty-handed.

In these days of novel H1N1 flu and all manner of predatory pathogens, the message is clear: Celebrate hand-washing day every day -- use soap!

The Global Handwashing Day took place for the first time on October 15, 2008, the date appointed by UN General Assembly in accordance with year 2008 as the International Year of Sanitation.