Pictures  taken  two years ago by the orbiting Hubble Space Telescope have this week revealed a stunning galactic merger that’s being traced around 250 million light-years away from the Earth. 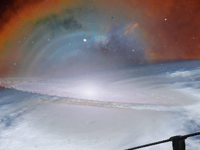 Situated in the constellation of Cancer, the massive ‘NGC 2623’ event is the result of two spiral galaxies coming together, and Hubble’s amazing batch of deep space photographs reveal the merger in its latter stages as the two original galactic centres violently blend to form one new nucleus.

According to expert astronomers, the distinctly cloudy and almost ethereal textures pictured surrounding NGC 2623 were created due to gasses being pulled around by the massive gravitational pressures of the merging galactic bodies as they clash at a speed of approximately 1,000 miles per hour (mph).

Despite billions of individual stars colliding at the event’s centre, studies reveal that around 100 new stars have formed in both the left and right tails, all of which are significantly brighter than similar clusters seen in other galaxies found much closer to our own Milky Way and could have been created by collision debris falling back into the nucleus.

The colour composite images were snapped back in 2007 by the Hubble Advanced Camera for Surveys (ACS).

The Tech Herald  contributed to the report.