Leafy Greens May Endanger Your Health

A new list of ‘risky’ foods has been released by The Center for Science in the Public Interest, and some of the names are rather surprising. 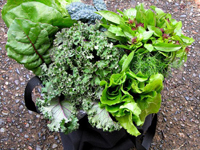 Leafy Greens May Endanger Your Health

The list is to show which foods are more prone to outbreaks of dangerous food-born illnesses, and include tuna, leafy greens, oysters, ice cream, cheese, tomatoes, berries, eggs, potatoes, and sprouts.

The study pointed to lax regulations and policies being ignored for the many cases of food poisoning each year. The study stated:

“Millions of consumers are being made ill, hundreds of thousands hospitalized and thousands are dying each year from preventable foodborne illnesses. Unfortunately, the FDA is saddled with outdated laws, and lacks the authority, tools and resources to fight unsafe food.”

Of all of the foods on the list, it is leafy greens that pose the most risks. There have been over 360 outbreaks in just 20 years, leading to over 13,500 reported deaths.

Associations representing farmers have criticized the report, saying that is scares consumers away from healthy foods that are a staple to many families in rural areas.

ChattahBox.com contributed to the report.