An interactive Web site may help you  to decide if flu's symptoms are bad enough to require a doctor's attention. One just can use the same type of triage calculations that doctors at Emory University use. 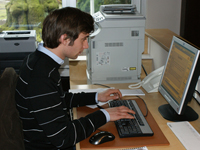 Microsoft Corp. unveiled the site Wednesday at http://www.h1n1responsecenter.com. Type in your age — it's only for people over 12 — and answer questions about fever, other symptoms and your underlying health.

The program may conclude you've probably got swine flu — known as the 2009 H1N1 strain — but that rest and fluids should be enough care, or that you need a non-emergency call to your own doctor.

It's part of efforts, including local hot lines, to keep people who aren't that sick from flooding already crowded emergency rooms.

Microsoft licensed the self-assessment tool from Emory, which based it on what the Centers for Disease Control and Prevention has determined are key risks factors for a bad flu outcome. A large insurer tested the tool against more than 2,500 records of patient visits for flulike symptoms in Colorado, and only two people deemed low-risk were hospitalized within the following two weeks.

The CDC also posts lists of signs to seek emergency flu care, including for children, at http://www.flu.gov.