Thursday researchers in the U.S. and Ethiopia made public fossils from a 4.4-million-year-old human forebear. The scientists say the findings reveal that the earliest human ancestors were more modern than scholars assumed and deepens the evolutionary gulf separating humankind from today's apes and chimpanzees. 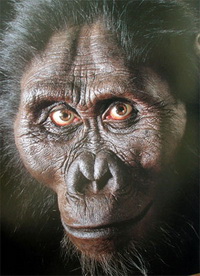 The highlight of the extensive fossil trove is a female skeleton a million years older than the iconic bones of Lucy, the primitive female figure that has long symbolized humankind's beginnings.

An international research team led by paleoanthropologist Tim White at the University of California, Berkeley, unveiled remains from 36 males, females and young of an ancient prehuman species called Ardipithecus ramidus, unearthed in the Awash region of Ethiopia since 1994. The creatures take their scientific name from the word for root in the local Afar language. They are not the oldest known homind fossils but they comprise the most complete set discovered so far.

"It is not a chimp and it is not human," said Dr. White. "It gives us a new perspective on our origins. We opened a time capsule from a time and place that we knew nothing about."

Although the differences between humans, apes and chimps today are legion, all shared a common ancestor six million years or so ago. These fossils suggest that creature--still undiscovered--resembled a chimp much less than researchers have always believed, The Wall Street Journal reports.

It was also reported, the skeleton of an early human who lived 4.4 million years ago shows that humans did not evolve from chimpanzee-like ancestors.

Instead, the missing link -- the common ancestor of both humans and modern apes -- was different from both, and apes have evolved just as much as humans have from that common ancestor, they said.

The researchers stressed that "Ardi" may now be the oldest known hominid, but she was not the missing link. "At 4.4 million years ago we found something pretty close to it," said Tim White.

They described the partial skeleton of a female representative of Ardipithecus ramidus. The hominid species lived 4.4 million years ago in what is now Ethiopia, ABC News reports.

News agencies also report, the new discoveries are being reported in 11 separate papers in Science by a total of 47 authors from around the world.

"This is an extraordinary achievement," said David Pilbeam, a noted Harvard anthropologist who was not connected with any of the research teams.

In an e-mail, Pilbeam called it "one of the most important discoveries for human evolution. The find itself is extraordinary, as were the enormous labors that went into the reconstruction of a skeleton shattered almost beyond repair," San Francisco Chronicle reports.