More than 25 years into the AIDS pandemic, scientists finally have a vaccine that protects some people -- but instead of celebrating, they are going back to the drawing board. 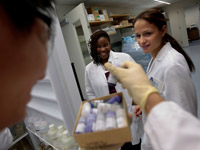 The vaccine, a combination of two older vaccines, only lowered the infection rate by about a third after three years among 16,000 ordinary Thai volunteers. Vaccines need to be at least 50 % effective, and usually 70 to 80 % effective, to be useful.

No one knows why it worked.

The vaccine is a combination of Sanofi-Pasteur's ALVAC canarypox/HIV vaccine, which includes synthetic versions of three HIV genes, and the failed HIV vaccine AIDSVAX, made by a San Francisco company called VaxGen and now owned by the nonprofit Global Solutions for Infectious Diseases.

"It is likely that significant efforts will be needed to fully understand the study results and to appreciate how they will inform the next steps to develop and deliver a safe and effective HIV vaccine," Dr. Peter Kim, president of Merck Research Laboratories, said in a statement.

"What is needed there is more in-depth analysis, to extend these findings, doing both clinical (human) and preclinical (animal) studies to find out why it is working and how we can make it better," Jim Tartaglia, vice president of research and development at Sanofi, told reporters.

Companies and non-profits along with governments have been working to make a vaccine against the human immunodeficiency virus that causes AIDS. The fatal and incurable virus has killed 25 million people and infects 33 million now.
Experts agree that a vaccine is the only way to conquer it, but the virus mutates unbelievably fast, can hide from the immune system and attacks the very cells sent to battle it.

To work, any HIV vaccine would have to activate both arms of the immune system -- the antibodies that home in on invaders such as viruses to neutralize them, and the T-cells that recognize and destroy viruses.

This vaccine did not appear to generate much of either response, and yet prevented infection 30 % of the time.

Even more confusing, among the 51 people who were vaccinated but were infected anyway, the virus thrived just as well as it did among unvaccinated HIV patients. Researchers would not have expected that -- they would have expected the vaccine to at least make the infection less serious, as influenza vaccines do, for example.

Dr. Donald Francis, a former government vaccine expert who helped develop AIDSVAX and who helped found Global Solutions for Infectious Diseases, said his team would be developing smaller studies to answer some of these questions. "We have a limited amount of vaccine now," Francis said.

The findings do offer renewed hope for finding a better vaccine.

IAVI believes the rewards could be substantial -- not just stopping the worst pandemic of our times, but financially.

"At its peak, an HIV vaccine could represent 5 % to 13 % of the total global vaccine market," IAVI estimates.

At $2 a dose for the developing world and $100 in richer countries, IAVI estimated companies might bring in $1.6 billion to $3.8 billion a year with an HIV vaccine.

Yet the private sector accounts for just 10 % of all AIDS vaccine research and development funding, the group estimates, according to Reuter's report.