Cities and towns await the arrival of the H1N1 vaccine at the end of October. Meanwhile, the Shrewsbury Board of Health is in the early stages of planning flu clinics for residents. 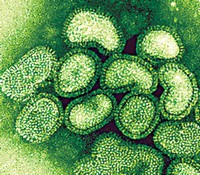 “We are working on planning it,” said Alarie.

Children are the highest priority for the vaccine as nearly 90 percent of people infected with H1N1, also known as swine flu, were young children, Shrewsbury Chronicle reports.

In the meantime, As the first round of the H1N1 vaccine is soon to become available, questions are being raised about its safety.

Dr. Joshua Meyerson, medical director for the Health Department of Northwest Michigan, said the vaccine is expected to have the same safety profile as the seasonal flu vaccine as it is made in the exact same method, just using the new novel strain.

“Influenza vaccine is very safe — hundreds of millions of Americans have received flu vaccines and the vaccine will continue to be monitored for safety in the same manner as are all vaccines in this country,” Meyerson said, Petoskey News-Review reports.

Meanwhile, University at Buffalo Reporter reports, as the semester gets under way, some students are experiencing mild flu symptoms, said Jim Reger, emergency planning program manager for Environment, Health and Safety Services. Though government laboratories generally are not testing people with mild symptoms to determine what type of flu they have contracted, at least some sick students probably have H1N1 because the regular flu season has yet to begin, Reger noted.

While some higher education institutions have established quarantine facilities where sick students can reside temporarily, “at UB, we do not have the ability to do that, so we are asking students to go home or self-isolate in their rooms,” he said.

UB is tracking the numbers of sick students through Student Health Services and an online reporting tool that enables sick students to notify university officials about their illness.

Officials are discussing the best way to track staff and faculty absences, which could affect the university’s ability to offer services. Reger reported that seven of 14 people in one department called in sick one day, University at Buffalo Reporter reports.