A pregnant woman in Arkansas U.S. surprised doctors twice over when she went in for a routine ultrasound this June. Doctors successfully located Todd and Julia Grovenburg's growing baby girl Jillian, but then discovered another smaller baby -- what could be Jillian's younger brother -- growing beside her. 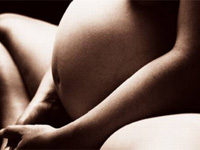 The Grovenburgs may have conceived their son Hudson a full two-and-a-half weeks after Jillian.

Different from identical twins or fraternal twins, the Grovenburg babies would have separate due dates and are considered to be a rare medical occurrence.

Dr. Karen Boyle of the Greater Baltimore Medical Center said it's uncommon for fetuses to differ so widely in size and development early in pregnancy, even though babies may differ widely in size at birth.

"It does really sound like this is a true case of different conception times for these children," said Boyle.

Reports of superfetation, or conceiving while pregnant, are very rare, Boyle said that he could only find about 10 reported cases.

"For these sorts of cases, I have to say, most of our bodies don't read the textbook," said Moore, an obstetrician and president of New Jersey's Sapphire Women's Health Group.

"I would say [it's] extremely rare, but then again, we would never know how often this happens. If the children are born at the same time -- it might be that they were conceived at different times."

"It [the second conception] can happen up to 24 days later than the first conception, and then you're putting the second baby at risk for lung development problems," said Boyle.

However, in the Grovenburg's case, Boyle said the difference of two weeks would not put the younger baby at much of a risk for health problems.

ABC News  contributed to the report.