U.S. researchers discovered that smoking bans in public places can significantly cut the number of heart attacks and other diseases caused by the harmful habit. 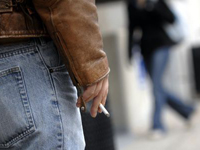 One research team found smoking bans in the United States, Canada and Europe had an immediate effect that increased over time, cutting heart attacks by 17 % after the first year and as much as 36 % after three years, they reported in the journal Circulation.

A second team found such bans reduced the annual heart attack rate by 26 %. Their report in the Journal of the American College of Cardiology estimates a nationwide ban in the United States could prevent as many as 154,000 heart attacks each year.

Both research teams said the findings support the adoption of widespread bans on smoking in enclosed public places to prevent heart attacks and improve public health.

"Public smoking bans seem to be tremendously effective in reducing heart attack and, theoretically, might also help to prevent lung cancer and emphysema," said Dr. David Meyers of the University of Kansas School of Medicine, who led the study in the Journal of the American College of Cardiology.

Smoking bans have been enacted in countries all over the world. In the United States, 32 states ban smoking in public places and workplaces, and many cities and other localities do, too.

Meyers and colleagues analyzed data from 10 studies on smoking bans in the United States, Canada and Europe to compare rates of heart attacks before and after public smoking bans.

They found women and younger people were most likely to benefit, possibly because they often work in or frequent bars and restaurants where smoking is common.

James Lightwood of the University of California-San Francisco, who worked on the study in Circulation, said prior studies have been inconsistent in their findings, but their analysis found that smoking bans had a compelling effect.

"This study adds to the already strong evidence that secondhand smoke causes heart attacks, and that passing 100 % smoke-free laws in all workplaces and public places is something we can do to protect the public," Lightwood said.