Consumption of  soft drinks, containing much sugar, has been named as a contributing factor to America's obesity problem for many years. A newly published study by researchers from UCLA Center for Health Policy and Research (CHPR) and the California Center for Public Health Advocacy (CCPHA) now consider it as a fact. 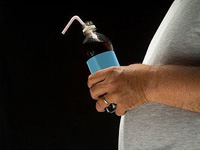 "Bubbling Over: Soda Consumption and its Link to Obesity in California", the study published by the group, studied data from more than 40,000 participants. The researchers found that adults who drank one soda daily or more were 27 per cent more likely to be overweight, regardless of income or ethnicity.

The study indicates that teens between the ages of 12 and 17 are the biggest consumers of soft drinks, drinking the equivalent of 39 pounds of sugar in sodas and other sugary drinks. Forty one percent of younger children consumed at least one soda daily but 62 per cent of adolescents drank one or more daily.

"Soda is cheap, sweet and irresistibly marketed to teens," says the study's lead author, Dr. Susan H. Babey, a research scientist with the UCLA Center for Health Policy Research. "Not enough teens know about the health and dietary risks of drinking huge quantities of what is essentially liquid sugar while television and advertising tell them it is 'cool' to do so."

With diabetes and other weight related health problems reaching epidemic proportions among this age groups, the relationship between soda and obesity needs to be addressed, according to Goldstein.

"If we are serious about tackling the obesity crisis, cutting back soda consumption has to be the top priority" Goldstein asserts. "Parents, communities, businesses and government all have a role to play in helping to reduce consumption. We cannot afford to raise another ‘Pepsi Generation.’"

Examiner.com contributed to the report.