The 60-year-old woman from Mississippi, U.S. had a canine tooth or "eye-tooth" extracted, shaven and sculpted then implanted into her eye as a cure for a decade of blindness.

Ms Thornton was blinded in 2000 after contracting a rare skin condition called Stevens-Johnson syndrome which caused scarring to her cornea.

The specially sculpted tooth was used as a base for a tiny prosthetic lens, her doctors said. A small hole was drilled into the tooth so the optical cylinder lens could be fitted. The lens and tooth were then inserted into Ms Thornton's cheek for two months before being implanted into her eye. 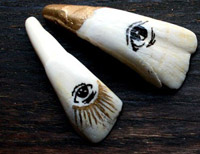 Grandmother With Curious "Eye-Tooth"
The Institute said: "A hole is made in the mucosa for the prosthetic lens, which protrudes slightly from the eye and enables light to re-enter the eye allowing the patient to see once again."

The procedure was first pioneered in Italy but this is the first time it has been used in the United States, according to Telegraph.co.uk.