Cancer And Depression: Is There Any Link?

Depression can promote cancer progress, according to a report published on Monday. 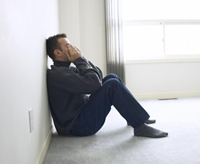 Cancer And Depression: Is There Any Link?

Eighty-five percent of cancer patients believe their mental state affects how quickly the disease progresses, but the Canadian researchers said that belief is not actually supported by the few studies that looked at it.

The researchers admitted they were surprised by the lack of clear link between depression and cancer progression, and cautioned that may be because so few clinical studies have been done on the subject, according to Reuters' report.