A new enterteinment appeared for innovation-lovers - Sportify. The music playing application is now available in a mobile version to premium mobile customers who have either the Iphone, Ipod Touch or a device running Google's Android. It is already in the Apple App Store and the Android Marketplace and its users are sure to enjoy it. Spotify is regarded by many as something of an Itunes killer. 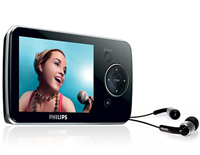 For a single monthly fee users get access to a huge range of music tracks that they can listen to at their leisure. As we know, the greengrocer's equivalent requires users to actually buy individual songs, a practice that is unpopular with some hardcore Internet users. So far there has been a huge response to the announcement. Over at the Spotify Mobile blog, users have been quick to discuss their positive experience of the service. Comments range from "Awesome! Amazing quality of service! Works great on my iPhone", through "Wow!!! Just got it on my Ipod Touch, logged in and off we go...all my playlists are there, done some artist searching and successful every time. This is just the most amazing thing to happen to the mobile music world", to "Completely...f**king...stoked! And I don't even use the word stoked. Seriously though, the app works perfectly, couldn't have been more satisfied." Some posters were even more enthusiastic and applauded Spotify for revolutionising the mobile music market.

"I think this is a significant date in the history of music. It's the first time music stopped being a physical or digital medium, and became a fluid medium you could have with you on demand. Not one track, or a few; all of them," wrote one poster going by the name of jsecure. However other contributors had some issues with the announcement. Some asked for a Windows Mobile release, while others suggested that the Android version had some teething problems, problems that apparently can be resolved with a simple phone reboot. Spotify does have plans to roll out its application onto other mobile platforms and has already shown off a version for the Nokia S60 Symbian browser. In a video posted on the firm's blog the app was seen to perform well on a Nokia E66 handset and offered offline features and easy syncing. Again, Spotify mobile will be free to premium customers. Information on Maemo, Blackberry, or Windows Mobile versions has not yet been released. A monthly subscription to Spotify costs about £10, or roughly the price of one and a half albums on Itunes, The Inquirer reports.