Milford residents were instructed on Sunday to boil all tap water after the town’s water supply was found to be contaminated with E. coli and other fecal coliform bacteria. 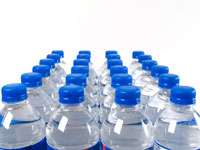 The contaminants were discovered in a sample taken Wednesday during routine testing. The Milford Water Co. also advised residents to discard any food, drinks, baby formula, or other items prepared with tap water since Wednesday, The Boston Globe reports.

Some town officials are upset that the public was not informed of the contamination right away after it was first detected last Wednesday. Selectman Bill Buckley tells The Milford Daily News that the timing is "unacceptable."

Company manager Henry Papuga says it’s the first time in his 25 years with the company that residents were advised to boil water. He says the company is investigating the cause and boosting chlorine content in the water to fight it, The Boston Herald reports.

- Boil water for three minutes prior to use and let cool. Use only water that has been boiled for drinking, diluting fruit juices, all other food preparation and brushing teeth.

- Dispose of ice cubes and do not use ice from household automatic ice maker. Remake ice cubes from water that has been boiled.

- Disinfect dishes and other food contact surfaces by immersion for at least one minute in clean tap water that contains one teaspoon of unscented household bleach per gallon of water.