The California Institute of Regenerative Medicine has awarded the University of California, Davis, $20 million for its $62 million stem cell research facility. 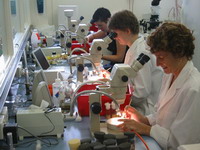 This grant is a part of $271 million in awards meant for 12 institutions.

The facility will be engaged in basic stem cell research, preclinical development of treatments and clinical research. It will include a lab and testing area that meets U.S. Food and Drug Administration standards for the development of cellular therapies.

UC Davis plans to open the facility in the summer of 2009.

The remaining part of the funding for the project will come from the university, individual donors and foundation grants.