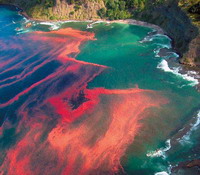 "Red tide" is a common name for a phenomenon known as an algal bloom, an event in which estuarine, marine, or fresh water algae accumulate rapidly in the water column, or "bloom."

Some red tides are associated with the production of natural toxins, depletion of dissolved oxygen or other harmful impacts, and are generally described as harmful algal blooms. The most conspicuous effects of red tides are the associated wildlife mortalities among marine and coastal species of fish, birds, marine mammals and other organisms. In the case of Florida red tides, these mortalities are caused by exposure to a potent neurotoxin called brevetoxin which is produced naturally by the marine algae Karenia brevis.

Scientists predict that this year the season of “blooming” will start in the Gulf of Maine Toxicity, or GOMTOX.

Scientists tracked down that this year a combination of abundant beds of algal seeds and excess winter precipitation have set the stage for a harmful algal bloom similar to the historic "red tide" of 2005.

In 2005 the Canadian red tide was discovered to have come further south than it has in years prior by a ship called The Oceanus, closing shellfish beds in Maine and Massachusetts and alerting authorities as far south as Montauk (Long Island, NY) to check their beds. Experts who discovered the reproductive cysts in the seabed warn of a possible spread to Long Island in coming years, halting the area's fishing and shellfish industry, which has endured for hundreds of years, and threatening the tourist trade, which constitutes a significant portion of the 118-mile-long island's economy.

To make more definite predictions scientist have to rely upon further weather patterns and ocean conditions.