Some countries in Africa have made the least progress among developing nations worldwide toward reaching targets in the United Nations Millennium Development Goal of reducing infant and maternal deaths, according to a report released on Wednesday. 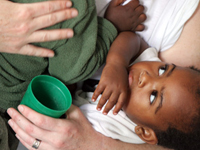 The report was released by the Partnership for Maternal, Newborn and Child Health, which includes about 240 members such as UNICEF, the World Health Organization and Save the Children. The report found that the 10 countries with the worst infant mortality rates are in sub-Saharan Africa, which is highly affected by HIV/AIDS, according to UNICEF Chief of Health Peter Salama.

"Many of these countries where under-five mortality has actually increased since 1990 are high HIV prevalence countries ... such as Botswana, Swaziland, Zimbabwe, Lesotho and South Africa," Salama said.

The report calls for an additional $10 billion to improve health interventions and reduce mortality rates. About 10 million women and children die annually from preventable causes, and major challenges include poor nutrition, weak health infrastructures and a lack of funds.

Many of the countries that made little or no progress on infant and maternal deaths are experiencing health care worker shortages. Countries that have made progress took steps such as bolstering vaccine programs and distributing more vitamin supplements and insecticide-treated nets.

The Millennium Development Goals are eight goals that 189 United Nations member states have agreed to try to achieve by the year 2015.

The goals, referred to in the article, run:

Reduce by three quarters, between 1990 and 2015, the maternal mortality ratio. Achieve, by 2015, universal access to reproductive health.