The IPCC's Working Group III is responsible for crafting reports that deal with the mitigation of global warming and analyzing the costs and benefits of different approaches. In the 2007 IPCC Fourth Assessment Report, they conclude that no one technology or sector can be completely responsible for mitigating future warming. 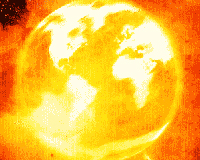 They find there are key practices and technologies in various sectors, such as energy supply, transportation, industry, and agriculture, that should be implemented to reduced global emissions. They estimate that stabilization of carbon dioxide equivalent between 445 and 710 ppm by 2030 will result in between a 0.6% increase and 3% decrease in global gross domestic product.

According to a new study, there are many technological challenges which will slow the fight against global warming, and reduction of CO2 emissions. The authors of the study have stated that the Intergovernmental Panel on Clime Change (IPCC) has failed to fund technological advances needed to continue the fight.

The study stated that the IPCC believes that technology will simply advance over time, in an overly optimistic manner.

The authors of the study include Roger Pielke Jr. from the University of Colorado at Boulder, Tom Wigley from the National Center for Atmosphere Research in Boulder, and Christopher Green McGill University in Montreal.

They believe that the overly optimistic ideas of the IPCC simply will not fly. Their study states that action is going to be needed to advance technology.

Technology will play a major role in the reduction of emissions in the future. Without policy and proper funding, technology will not advance at a rate needed to successfully fight global warming.

They state that the IPCC believes the reductions will occur automatically, without any type of policy intervention or action. The authors of the study state though that this is not the case.

Pielke states that the IPCC report assures all that the majority of emissions reductions required will occur automatically.

If technology does not advance through policy and proper funding, it may enter a stalled state, causing the fight against global warming to greatly slow.

The broad agreement among climate scientists that global temperatures will continue to increase has led some nations, states, corporations and individuals to implement actions to try to curtail global warming or adjust to it. Many environmental groups encourage individual action against global warming, often by the consumer, but also by community and regional organizations. Others have suggested a quota on worldwide fossil fuel production, citing a direct link between fossil fuel production and CO2 emissions.