As science organizations and funding bodies put ever more emphasis on outreach to foster public understanding both of the results and the wider relevance of science, recent years have seen the creation of a number of new science festivals. 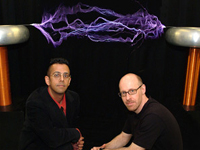 New York City Schools Chancellor Joel I. Klein, award-winning actor Alan Alda, Columbia physicist Brian Greene, Muppet scientist Dr. Bunsen Honeydew, and a panel of university presidents held a special press conference today in order to announce the details of the World Science Festival. The festival, the first of what is expected to be an annual event, will run from May 28 to June 1, 2008 in New York City.

Special events will be held all over the city - from Columbia University to the Guggenheim to the Metropolitan Museum to the Museum of Modern Art, plus other events at smaller theaters and lecture halls.

Dr. Bunsen Honeydew helped to unveil some of the festival's programs. The Muppet scientist took to the microphone to announce the roster of family-oriented programs and exhibits. Events include special exhibits featuring Scholastic's Magic School Bus, entertaining demonstrations from mind-boggling mathemagicians, special workshops with Disney Imagineers, a giant World Science Festival's street fair, and much more.

Stating that "science can be as explosive and violent as any TV program", Bunsen showcased his concept of "string theory" by spraying the festival's creator with a can of silly string.

Dr. Bunsen Honeydew will be featured in the Disney-sponsored Imagineering events. The festival will feature several events sponsored by the team of scientists and engineers at Disney Imagineering. These events will give an inside look at how science makes Disney magic.

Modern science festivals have a number of different roots. The British Association for the Advancement of Science's Festival of Science evolved out of the society's annual meetings, first held in 1831, which were originally meant to provide a discussion forum for scientists, but later became a public showcase of science. The oldest science festival in the modern sense appears to be the Edinburgh International Science Festival, which was first held in 1988.

The US has been something of a late comer as far as regular science festivals are concerned, although the annual meeting of the American Association for the Advancement of Science includes a number of public events. Since 2004, there has been a science festival in Pittsburgh (the SciTech festival; from 2005 on known as the SciTech Spectacular), and ambitious new science festivals are being organized both in Cambridge, Massachusetts (the Cambridge Science Festival, starting in April 2007) and now in New York City.

Festivals can vary greatly in size and scope. A university might stage a small festival in its hometown; on the other end of the scale, the 2006 British Association Festival of Science held on September 2-9 in Norwich, England, was attended by more than 174,000 visitors.