Throughout the centuries, widely varying human attitudes toward wolves have been highly-charged and often colored by fear and misunderstanding. As a result, the Gray Wolf has been extirpated in much of Europe and the U.S. Historically, people have tended to view wolves as threats to livestock and human well being, believing that they represent a threat to the notions of civilization and dominance of nature in general. 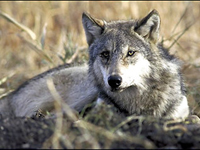 But now due to better understanding of laws of nature people reconsider former notions about the relationship between predators and the land.

Under state law, it is illegal to kill, harm or harass endangered species, including the gray wolf, according to state Department of Fish and Wildlife officials.
The March 28 federal action includes wolves in the eastern third of Washington State east of highways 97, 17 and 395 from the Canadian border to the Oregon border.

Extending the federal de-listing into Washington was based on the expected dispersal of wolves from recovered populations in Idaho, Montana and Wyoming, according to state officials.

Wolves remain federally listed as an endangered species in the western two-thirds of the state.

“Today's federal action means that in the eastern third of the state, (the fish and wildlife department) is the lead for wolf management, including response to suspected wolf depredation of livestock,” said Harriet Allen, the department’s manager of threatened and endangered species.

The gray wolf, also known as the timber wolf or wolf, is a mammal of the order Carnivora. The gray wolf is the largest wild member of the Canidae family and an ice age survivor originating during the Late Pleistocene around 300,000 years ago.