The current judicial interpretation of the U.S. Constitution regarding abortion in the United States, following the Supreme Court of the United States's 1973 landmark decision in Roe v. Wade, and subsequent companion decisions, is that abortion is legal but may be restricted by the states to varying degrees. 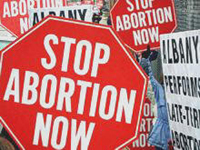 Abortion opponents in South Dakota filed petitions this week that are likely to put an initiative on November's ballot calling for a near-ban on abortion, renewing a contentious fight over a similar proposal in 2006.

The group VoteYesForLife.com said Tuesday that it turned in on Monday three times the number of signatures needed to qualify an initiative that would ban abortion in most cases. Unlike the 2006 law, however, it includes exceptions to allow the procedure when necessary to protect the health of a woman and in cases of rape or incest.

The 2006 proposal, rejected by 56 percent of voters, would have allowed abortion only to save a woman's life.

The new language was drafted by South Dakota Attorney General Larry Long, state Rep. Roger W. Hunt (R) and 20 other lawyers. As with the 2006 initiative, passage would probably trigger a lawsuit that could end up before the U.S. Supreme Court and provide an opportunity to reconsider its 1973 Roe v. Wade ruling.

Roe v. Wade, 410 U.S. 113 (1973) is a United States Supreme Court case that resulted in a landmark decision regarding abortion. According to the Roe decision, most laws against abortion in the United States violated a constitutional right to privacy under the Due Process Clause of the Fourteenth Amendment. Roe v. Wade is one of the most controversial and politically significant cases in U.S. Supreme Court history.

The sponsors said their polls show that a majority of South Dakotans support the initiative with the exceptions.

The Campaign for Healthy Families, formed by Planned Parenthood and other groups to fight the 2006 initiative, said the new proposal is still too restrictive.

A woman would have to report rape or incest to police before seeking an abortion to qualify for that exception. "A woman who is the victim of incest and is 13, being raped by her father, is highly unlikely to report that," said Sarah Stoesz, president and chief executive of Planned Parenthood Minnesota, North Dakota, South Dakota.

Opponents also said the definition of a health risk to the woman is too narrow because the language implies a doctor would have to be certain the woman's health was threatened and excludes mental and emotional issues as health exceptions.

The petition would make it a class 4 felony to perform any kind of abortion or prescribe, procure or sell drugs or any other items to induce abortion unless the exceptions applied.

The secretary of state must verify at least 16,776 signatures as valid to put the issue on the Nov. 4 ballot. The group has collected almost 50,000 signatures.

South Dakota's existing abortion laws are considered among the nation's most restrictive.

The Planned Parenthood clinic in Sioux Falls is the only one in the state offering abortions. Stoesz said the organization invites doctors from neighboring states because few locals are willing to perform the procedure. About 800 abortions are performed per year.

Stoesz said abortion rights advocates are confident that voters will reject the initiative.