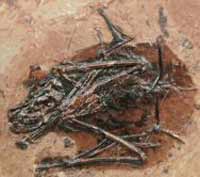 The fossils of primitive bats that lived 52 million years ago give answer to the questions which scientists have been trying to resolve for a long period of time. Now it has become obvious that bats developed their radar-like abilities when they started flying.

The fossilized skeleton of the uncovered bat shows that the creature could fly, although it did not have the echolocation ability, which modern-day bats use for hunting in the dark. All the previously recovered fossils of ancient bats had both flying and echolocating features, which could not say which of those came first.

Bats being terrestrial and light-boned, they have not fossilised very regularly. An Early Eocene bat, Onychonycteris finneyi, was found in the 52-million-year-old Green River Formation in Wyoming (US) in 2003. The new genus was placed in a new family when it was published in Nature, February 2008. It was clearly a flier, but the well-articulated skeleton showed underdeveloped coclea of the inner ear, which provide echolocation capabilities in all modern true bats, demonstrating at last that flight in bats was developed before echolocation. Another early Eocene fossil Icaronycteris index, was unearthed in 1960.

Little hard evidence exists about the evolution of bats, since their small, delicate skeletons do not fossilize well. However a Late Cretaceous tooth from South America resembles that of an early Microchiropteran bat. The oldest known definite bat fossils, such as Icaronycteris, Archaeonycteris, Palaeochiropteryx and Hassianycteris, are from the early Eocene (about 50 million years ago), but they were already very similar to modern microbats. Archaeopteropus, formerly classified as the earliest known megachiropteran, is now classified as a microchiropteran.