The question – when bats gained their sonar-like ability to navigate and locate food – has long tortured scientists, but was finally resolved. 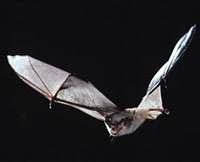 A group of archaeologists has discovered a bat fossil in Wyoming. The well-articulated skeleton showed underdeveloped coclea of the inner ear, which provide echolocation capabilities in all modern true bats, demonstrating at last that flight in bats was developed before echolocation.

The new fossil, Onychonycteris finneyi, was found in the 52-million-year-old Green River Formation in Wyoming , US, in 2003. It gives rise to a new genus and family.

Another early Eocene fossil Icaronycteris index, was unearthed in 1960. But bats being terrestrial and light-boned, they have not fossilised very regularly.

Bats’ most distinguishing feature is that their forelimbs are developed as wings, making them the only mammals in the world naturally capable of flight (though other mammals, such as flying squirrels, gliding flying possums and colugos, can glide for limited distances).

A measure of the success of bats is their estimated total of about 1,100 species of bats worldwide, accounting for about 20 percent of all mammal species. About 70 percent of bats are insectivores. Of the remainder, most feed on fruits and their juices. Only three species sustain themselves with blood, some preying on vertebrates: these include the leaf-nosed bats (Phyllostomidae) of Central America and South America, and the two bulldog bat (Noctilionidae) species, which feed on fish. At least two species of bat are known to feed on other bats: the Spectral Bat, also called the American False Vampire bat, and the Ghost Bat of Australia. One species, the Greater Noctule bat, is believed to catch and eat small birds in the air. Bats are present throughout most of the world; despite the cold weather, there are six species of bats in Alaska.